In the days when black powder was used for blasting in mining operations, this was the knot that was tied around the top of the bag containing the black powder to hold the fuse in securely—hence, it’s other common name, the bag knot. 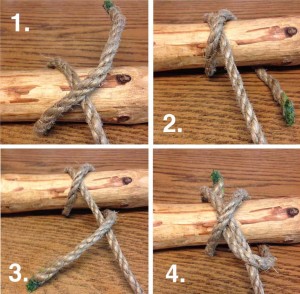 The constructor is based on the clove hitch, except after the first half hitch, the running end forms an overhand knot with the standing part. It’s this extra half-knot that provides additional hold when the hitch is pulled tight.

To tie a Constrictor Knot in the standing part of the rope over an open spar:

1) Make a right overhand loop.
2) While holding the left side of the loop, twist down on the right side counter clockwise making a right underhand loop.
3) Place this second loop behind the standing part and pass it under the first loop.

4) Grab hold of both loops and place then over the spar.
5) Pull tight.