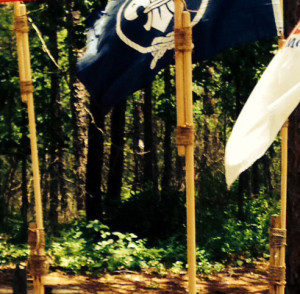 There are no frapping turns. The manner in which this lashing needs to be applied results in the poles being in a position where they are already tightly touching. Taking frapping turns between the parallel poles would only weaken the connection.

The objective is to combine the poles together to make a longer length that is as rigid as possible. So, connecting two poles in this fashion definitely requires a good overlap between them. It also requires two lashings, each tied tightly well near the ends of each pole where they overlap.