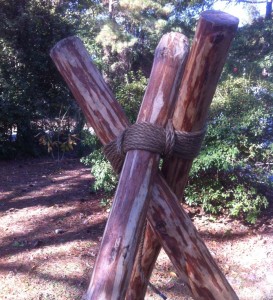 The tripod is the most simple self-standing pioneering structure. It’s frequently used in the building of camp gadgets. In larger projects, two tripods can support a crossbar or support two parallel spars for a platform.

1) The tripod lashing with “plain turns” is a simple and quick way to lash together three poles into a tripod.

2) Lay the three poles alongside each other, making sure the butt ends are lined up evenly, and tie a clove hitch to one of the outside poles.

3) Wrap the rope around the poles six to eight times, laying the turns of rope neatly alongside one another. (How stiff the tripod legs will be when they’re separated depends on the number and tightness of these wrapping turns.)

4) Make two tight fraps on either side of the center pole. End with a clove hitch around an outside pole. Spread the legs of the tripod into position, crossing the outside poles under the middle pole.

Note: When a tripod lashing is used to build a tripod that will support excessive weight for a longer duration, forming the wraps using racking turns (figure of eight) provides more contact between the poles and the rope.