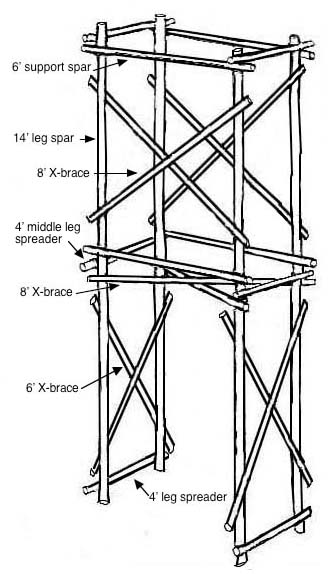 This simple project is an impressive feat of Scout engineering. While in actuality it’s a tower that requires hoisting, it’s also a rather tall campsite gateway (you can walk under it), and also quite an elaborate flag display. Hence its name: “Four Flag Gateway Tower.” When flags are lashed to each corner and the wind blows, this project can create quite a spectacular effect.

Here are the materials you’ll need: 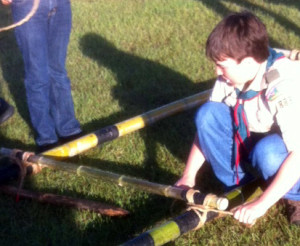 Assemble the Four-Foot-Sides – Begin by laying out two pairs of 14-foot spars for the tower legs, side by side, each about 3-1/2 feet apart. Be sure the butt ends are even at the bottom so the tower will stand up straight. With square lashings tightly lash each pair of legs together starting with a 4-foot bottom leg spreader about 6 inches up from the butt ends. Lash on a 4-foot middle leg spreader in the middle of the 14-foot legs (7 feet up), and a 4-foot top spreader about 3 inches from the top of the 14-foot legs.

This project consists of several sub-assemblies, and with a division of labor, can be built in good order e.g. building both of the Four-Foot-Sides while simultaneously, laying out the position of the legs and building the anchors.

When the legs of each Four-Foot-Side are joined with the three 4-foot spreaders, lash on two 6-foot X-braces using square lashings to join the ends to the legs, and a diagonal lashing where they cross, forming a trestle in the bottom half of the legs. (Remember, three of the ends are lashed to the inside of the legs, and one on the outside, so that a slight gap is created where they cross As you commence the diagonal lashing, this gap will be sprung together.) 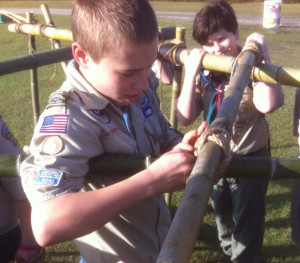 Now, lash on two of the 8-foot X-brace spars diagonally between the two 6-foot supports using square lashings to join the ends to the legs, and a diagonal lashing where they cross, forming a trestle in the top part of the wide (6-foot) side.

Join the other Side – To make the lashings to join the other side, you have to get the whole crew together to carefully lift and roll the tower over 180° so that it’s laying on the X-brace, and the other side is easier to get to. Once rolled over, repeat the above process to join together the remaining Four-Foot-Sides. 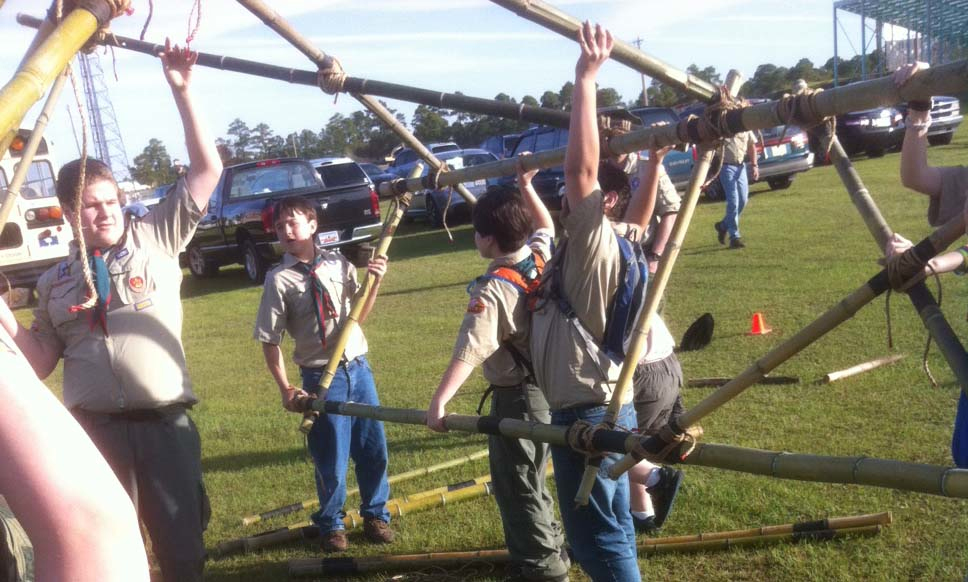 Lashing on the Middle X-Brace – This X-brace is what will keep the sides from racking. Lash the two remaining 8-foot X-brace spars diagonally across the legs just under the 4-foot middle leg spreader. Use square lashings to lash them to the legs and a diagonal lashing where they cross. To accomplish this, some crew members will have to hold up the top of the tower so that there is better access to all four ends of the 8-foot X-brace spars.

Lashing on the Flags – Lash the flagpoles of the four selected flags to the top of each tower leg using a couple of tight round lashings.

Note: This design is not self-standing. Therefore, allowing for the necessary guylines, it requires a space wide and deep enough to accommodate a 16-foot x 16-foot area.

Anchors and Guylines – Lay out the position of the four legs on the ground. (This can be done at anytime.) Then determine where the four anchors for the guylines will be placed to steady the legs of the tower. Using the pioneering stakes, build four 1-1 anchors. Each should extend 16 feet, and 45° out from the leg. When all the lashings are done, move the tower to where it will be hoisted.

Before Hoisting the Tower – Attach the four guylines securely to the legs, about 10 feet up, with rolling hitches or roundturns with two half hitches. Note: Since this design has no halyards, before hoisting the tower make sure the flags are unfurled. 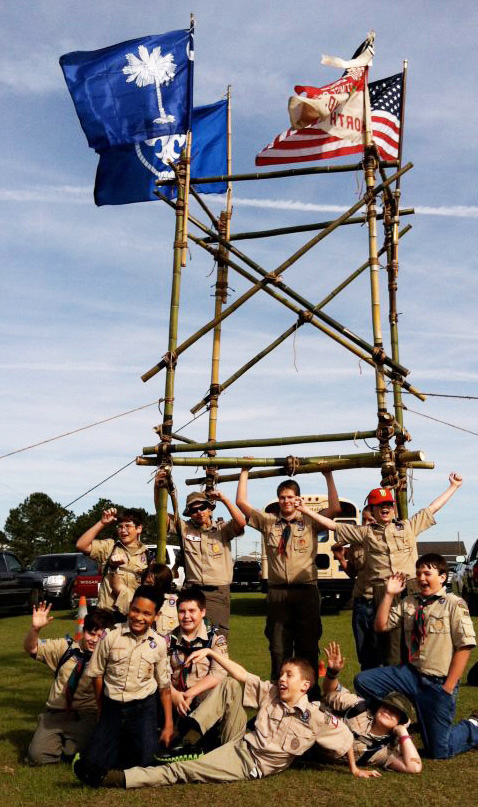 Hoisting the Tower – You’ll need a whole crew to do the hoisting. Get ready to hoist the tower by delegating the following:

When everyone is in position, the signal caller should direct the Scouts on the hoisting ropes (the pullers) to hoist the tower into position, while the lifters start lifting. Care should be exercised not to over pull the tower. As soon as the tower is standing, four Scouts should temporarily tie the guylines to the anchors using a roundturn with two half hitches.

Heeling the Tower – If the tower is uneven, you can heel the butt ends of the legs 4 to 6 inches deep as needed to make it more level.

Tightening the Guylines – As soon as the tower is in position, go to each of the anchors and untie the roundturn with two half hitches and replace it with a rope tackle. Use the rope tackles to hold the tower steady, by gradually applying strain to each of the four guylines at the same time. Do this by tying a butterfly knot in each guyline about 6 to 8 feet from the anchor. Then wrap the running end of the guyline around the forward stake of the anchor and back through the loop in the butterfly knot (refer rope tackle). When rope tackles are tied to all four anchors, gradually tighten the lines. Apply enough strain to each of the guylines to hold the tower firm and in a vertical position. Then tie off the rope tackles by securing the running ends with half hitches.

Hoisting a tower in itself is an exhilarating experience, and even more so when the tower is flying your flags!