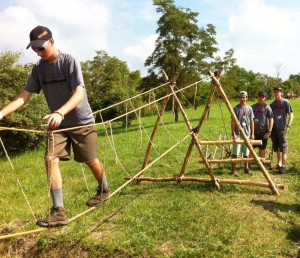 The time-tested, traditional monkey bridge is perhaps the most familiar of all Scout pioneering projects. It’s frequently featured at Scout Expos, Camporees, Scout Camps, and is often a central attraction at public gatherings where Scouting is represented.

Using a double A-frame to build a monkey bridge is a departure from the common X-frame that supports the foot rope and hand ropes, but it has two distinct advantages over the X- frame version. First, the double A-frame provides a wider base making it less likely to tip over. The second advantage is that the positions of the A-frames can be adjusted so the span between the hand ropes can be narrowed for better balance as you make the crossing.

As the saying goes, “there’re many ways to skin a cat.” So it goes, there are many procedures you can follow to build your bridge. Here’s one provided by the designer of the Double A-frame Monkey Bridge, Adolph Peschke:

Building the A-frames – The first step in building this monkey bridge is to build four identical A-frames using the 8-foot spars for the two legs, and 6-foot spars for the ledger. Make sure the ledgers of each A-frame cross the legs at the same height, and that the tips of the legs intersect at an equal distance from the tops. Lash each A-frame together with three tight square lashings. 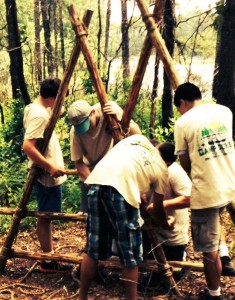 Double A-frame – When you have four identical A-frames, you can lash two of them together. This can be accomplished by holding the A-frames up and maneuvering them into position, or laying one A-frame on the ground and then putting another on top of it so that the bottom ledgers overlap one-half their length (about 3 feet). The first step in lashing the A-frames together is to go up where the two legs cross (the X formed by one leg from each A-frame). Then with a good tight square lashing, lash the two legs together. Note: The point where these two legs are lashed together is where the foot rope will rest. You can adjust the overlap of the two A-frames to adjust how high the foot rope will be off the ground. Also note where the tops of the A-frames are, because this is where the hand ropes will be.

Identical A-Frames: Lay out the first set of three spars (two legs and one ledger) on the ground in position for lashing. Before lashing, drive three stakes, as follows, to help you make all four A-frames the same size: Drive a stake at the top to mark where the leg spars cross. Then drive stakes to mark the positions of where the bottom ledger crosses the legs. This will also indicate how far the legs are spread apart. Now you can lash the four A-frames together with three square lashings, laying them out one at a time using the stakes.

To complete the double A-frame, stand it up so the butt ends of all four legs rest solidly on level ground. Lash the two bottom ledgers together where they overlap with three round lashings or strop lashings. (A strop lashing is easy to tie. Halve the rope, place the midpoint behind what you’re lashing, wrap both ends around the spars a few times and finish with a square knot.)

Site Preparation – Before you can erect the double A-frames, you need to prepare the site. Begin by stretching a length of binder twine along the center line of where the monkey bridge is to stand. Working from the center, measure 10 feet toward each end to mark where the A-frames are to be placed. They should be 20 feet apart. Then mark out another 10 feet from each A-frame to where the anchors are to be built.

Note: These dimensions are for building a bridge with a 20 foot span. This is the maximum span for a bridge using a 50 foot rope. The extra 30 feet of rope is needed to have 15 feet of rope at each end for the proper distance from the A-frames to the anchors (10 feet) and for the knots at the anchors (5 feet).

Building the Anchors – The foot rope will be attached to anchors at both ends. Before erecting the double A-frames, build a 3-2-1 anchor, or a log-and-stake anchor, 10 feet from where the A-frames will be erected.

Rope Grommet – After the anchors are built, attach a rope grommet with a ring or shackle in it.

Position the A-frames – Prepare to erect the monkey bridge by moving the A-frames into position no more than 20 get apart. Lay them down on the binder twine that marks the center line of the bridge.

Hand and Foot Ropes – Now you can prepare the hand and foot ropes for the monkey bridge. Lay the foot rope in a straight line off to the side of where the A-frames are laying. Then lay the two hand ropes on the ground next to each other so they’re parallel to the foot rope and 42 inches away. 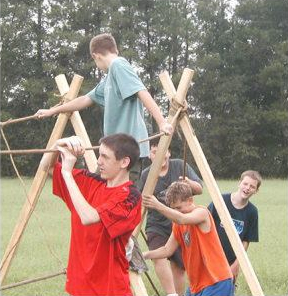 Assembling the Bridge – You’re just about ready to assemble the bridge. First place a piece of burlap or heavy canvas (called a “saddle”) in the V formed by both double A-frames. This will protect the foot rope and allow it to slide a little in the V without interfering with the lashing rope.

Now get the crew together to erect the bridge. You will need a safety officer to watch for any problems that might occur, and a signal caller to tell the crew members what to do. You will need two Scouts to lift and hold each double A-frame in place, two more Scouts to lift the foot rope into the V of the double A-frames, and two more Scouts to lift the two hand ropes into place at the tops of the A-frames. Lift everything into place. Then, holding the A-frames steady, temporarily tie the hand and foot ropes into the rings of the grommets using a roundturn with two half hitches.

Final Testing – With caution, one crew member can get on the bridge as all lashings, anchors, and knots are observed by the safety officer and all other crew members. Make adjustments as required. If too much sag is experienced during use, re-tighten the hand and foot ropes as necessary.

( Adjusting and maintaining the strain on the hand and foot ropes can be efficiently managed using rope tackles.)

Monkey bridges were introduced to Scouting by Baden-Powell. While in India, he saw what he described as: “bridges out of three ropes…connected together so that one rope forms the footpath and the others make the handrail on each side.” He drew a picture of such a bridge and described it in Scouting for Boys. Monkey bridges have been a part of the Scouting program ever since.