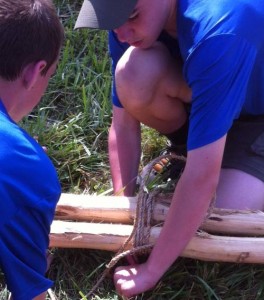 Use a shear lashing when two parallel poles are to be opened out like scissors to make a pair of shear legs. What are shear legs? Simply put, they’re two upright poles, lashed together at the tips with the butt ends (bottoms) spread apart to support some kind of weight. In Scout Pioneering we frequently use shear legs to form an A-frame.

The fastest and easiest form of this lashing is with “plain turns” and is tied as follows:

1) Start with a clove hitch around one pole. (Wrapping the short end (tail) around the running end will secure the clove hitch.)

2) Make five to ten wrapping turns around the poles. (The more wraps you make, the stiffer the lashing will be.)

3) Take two tight fraps around the wraps between the poles.

4) Finish with a clove hitch on the opposite pole, and then spread the legs as needed.

Note: When the shear lashing will be applied to a structure that is to be used for a longer period of time, forming the wraps using racking turns (figure of eight) provides more contact between the poles and the rope.