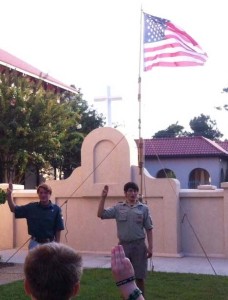 Lash the staves together. – Lay out the Scout Staves so they overlap one another about ten inches. Join them together with six tight round lashings.

Attach the guylines. With either rolling hitches or roundturns with two half hitches, tie on the guylines at about 3/4 of the way up to the top of the pole.

Hammer in the stakes. About seven to eight feet from where the pole will stand, hammer in each stake at a 20º angle, forming an equilateral triangle.

Attach the flag. Spacing it so the top and bottom edge are stretched onto the top stave, tie on the flag.

Raise and secure the flagpole. Taking turns, one Scout holds the pole up as the other attaches a guyline to each stake to hold the pole in a vertical position with a rope tackle.