Before you begin learning new knots, you need to know some of the basic terms used in knot tying. You should become familiar with these terms and use them as you learn how to tie the various knots.

Running End and Standing Part – These are two of the most common terms used in knot tying. The running end is the end of the rope that is used to tie the knot. This end is sometimes referred to as the working end. The rest of the rope is the standing part.

Underhand Loop – And underhand loop is formed when the running end of the rope is placed under the standing part.

Bight – A bight is formed by doubling back a length of the rope against itself to form a U. This can be done near the end (as shown on the left), or anywhere along the standing part (as shown in the middle). Bights can vary from a few inches to a few feet in length. A bight doesn’t have to have a sharp bend. It can be “open” (as shown on the right). In this case, the running end of the rope is alongside the standing part of the rope, but is not crossed over or under (which would form an overhand loop or an underhand loop). 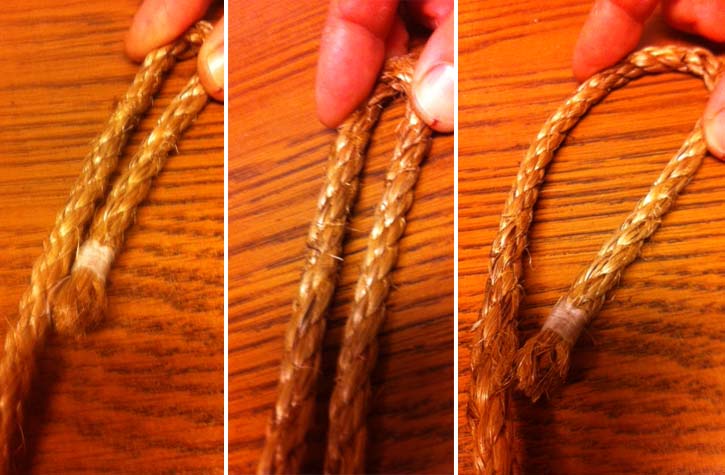 Take a Turn – The term take a turn means to wrap a rope around a spar or stake so it continues off in the opposite direction. The friction this creates will give you a grip on the stake or spar that will help you hold the strain on the line. It also gives better control in taking up or letting out a line.

Roundturn – To make a roundturn, wrap the rope completely around a spar and bring the running end back along the standing part of the rope. A roundturn gives you even more grip in holding the strain on a line, and is the basis for tying several knots, as when making a roundturn with two half hitches.